FDA – NOT FOR DUCHENNE 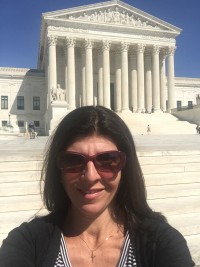 As I sit bleary-eyed  on the airplane flying home from what should have been a “successful” trip to DC, I am still stunned and disheartened from yesterday after a grueling TWELVE HOUR meeting with the FDA and it’s Advisory Committee, that went from an historic event into a catastrophe.   I want the word to know what we are dealing with so it is with great emotion that I share my experience with you.   Allow me to walk you through it:

Hundreds of Duchenne organizations, parents / patients, scientists, clinicians and doctors from the U.S. as well as other countries had been preparing for months for this advisory committee meeting. This meeting was to serve as a review of the drug Eteplirsen and providing advice to the FDA to approve or not approve what would be the FIRST EVER approved Duchenne drug in the United States and FIRST EVER Exon-skipping drug. Eteplirsen is currently the only drug currently on the docket for Sarepta Therapeutics. Sarepta believes in the exon-skipping method so fully, they have take our cause on – as their sole product for now.

2) It skips over Exon 51 – through weekly IV infusions, and will help 13% of the DMD population.

3) After this is approved, it paves the pathway for all other exon-skipping drugs – which are already in trial, as well as the other promising DMD drugs in the Pipeline.

4) Sarepta is committed to helping the DMD community by drug development.

5) It has been in trial for 4 years on 12 boys and has shown effectiveness with NO side effects.

6) DMD boys on the drugs regained strength and physical skills that are impossible to get back after they are lost with DMD.

7) Most Important: The FDA has the sole responsibility, based on the 2012 FDASIA legislation that was passed in Congress, that allows the flexibility for accelerated approval on a drug for a life-threatening disease with no other treatment options, that is “reasonably” likely to show benefit. An AID/HIV drug was approved under this act. Really? A disease that is a majority of the time completely PREVENTABLE? Really? But for a genetic disease that one is born with and is essentially, an eventual death sentence? Nothing? ….Ok got it.

Will skipping Exon 51 help Alexander? No. But he needs to skip Exon 2 – which is already showing great promise in animal models and Nationwide Children’s Hospital is filing a pre-investigational new drug application is being submitted to the FDA.

Will exon-skipping be the cure for Duchenne? NO. But it would eventually work along with a cocktail of other drugs, that can put the “brake on” – and dramatically slow the progression of the disease in every way.  It will ameliorate hundreds of boys with Duchenne today – and keep them walking and help the ones that are no longer ambulatory with upper body strength. What does this mean? The boys that currently cannot feed themselves or scratch their nose – would most likely re-gain that strength and more independence.   We take for granted the luxury of climbing stairs, jogging, getting into a car, opening a jar, getting into bed, rolling over in bed, feeding ourselves, yet hundreds of thousands of DMD boys struggle with these tasks every single day.

Our belief in the drug is great. There were over 1000 in attendance – mostly Duchenne families with the true heroes of the day, the DMD boys in their power wheelchairs accompanied by their companion dogs and parents. Hundreds from around the world. The meeting had to be moved to the Marriott College Park to accommodate the crowd. Accessible taxis lined up outside, letting off the brigade of hopeful and chipper DMD families with wheelchair bound kids and service dogs, swarming the hotel lobby. It was wonderful to meet parents from the UK, Miami, Boston, Philly, and even from LA I had never met. The mix of parents, doctors, DMD kids, dogs, volunteers, government workers and camera crews covered the space.   It truly felt like something historic was taking place.

This  – less than sterling – “Advisory Committee” consisted of MDs in Epidemiology and Neurology, Professors in Neurology, Psychiatry and Behavioral Science, etc. This Advisory Committee as well as the FDA were presented with hundreds of pages of reports on the 4 year trial, showing in detail the efficacy of the drug through both rigorous invasive muscle biopsies and numerous physical tests. It also showed the non-toxicity of the drug, After the facts were laid, FIFTY ONE speakers got up to give testimony of the benefits of the drug. YES – FIFTY ONE – From doctors testifying of their patients benefits while receiving the drug, to Scientists diligently explaining the science, and to the most heart-tugging testimonies from parents and young boys, pleading that the FDA provide compassion and flexibility in their considerations for a drug that clearly works. One DMD boys pleaded with the FDA saying “Please don’t let me die early!”   When I say gut-wrenching – I mean it.   What next you ask?   In the late afternoon (8 hours later)– it came time for a vote. – the FDA watched as the Advisory Committee members voted on the 7 questions that they posed to them.   The first 6 votes came down quickly not in favor. The audiences disgust and anger was increasing. Then the most important last vote came: – to vote on approval for Eteplirsen.   It was 7 against. 3 in favor and 3 abstained (Abstained? – one guy didn’t understand the question – HELLO??!).   There were now louder gasps from the audience. We (DMD community) were holding our rage at bay until we began to hear each committee member’s reasoning for voting against or abstaining. As we began hearing things like: “not a well-controlled trial,” and issues with the non-placebo affect, or on criticizing how dystrophin proteins were measured.   The rage grew. When one MD on the committee had the audacity to bring up his suggestion for a “further trial” – all hell broke loose. A further trial would mean that the drug would be years away from approval, and hundreds of boys would suffer.   From each side of the room, anguished parents screamed out in protest, Duchenne boys that framed the room had tears streaming down their faces and as the heat went up and the screams and were amplified , parents wheeled their crying boys swiftly out of the room.   The most powerful moment of the day came when one DMD boy who’s DMD brother benefits from the drug, angrily zoomed his wheelchair straight down the aisle towards the panel with anguish and tears covering his face crashing straight into the row of chairs that was to serve as the barrier between “them” and us.  I was overcome with tears and angst, but was secretly wishing that that kid had a grenade he could throw over the barricade as the pinheads were just staring back at him.  His poor Mother had to whisk him away so they could grieve outside.   How those committee members and the FDA were able to sleep last night after that visual – is beyond me.

Never have I seen anything so shocking, so tragic and so unjust.   Oh yes, I forgot the OJ verdict.   Well, here we are again. We got the “bloody glove, ” “the DNA,” the “Bruno Magli shoe prints at the crime scene,” but there is no justice because we are caught up in the how’s and why’s and not the circumstantial evidence that proves ETEPLIRSEN WORKS!!!   Hey – don’t we take Tylenol when we have a headache?   Do we know how it works? No. Does it matter? NO!

So what now? The FDA has until May 26 to provide a formal response. Janet Woodcock from the FDA seems to be a proponent for us, and will serve on this decision-making, however, the FDA typically follows the Advisory Committees recommendations, which then would be a NO vote and a tragedy. What does this mean? Simply put: Sarepta goes back to the drawing board, and continues this in trial mode, seeking millions more dollars in funding to continue the trials under the FDA’s completely unreasonable guidelines. It would also mean that thousands of Duchenne boys will not have access to the drug and will further decline. The boys in the trial will hopefully be able to stay on drug until this gets resolved, but we all know quick that will happen!   NOT.

You see – Duchenne is not mainstream, the drug is targeted and small.   We cannot pay celebrities to speak for us like other causes, and we don’t have the funding and power to get in bed with the government. We are not sexy.  With that said, this is not the only hope for Duchenne, but it certainly puts a BIG Damper on things. The clock is ticking fast and we are scared.

Thankfully, there are many other exciting breakthroughs in the pipeline, gene editing being one of them – which is more exact, but we are still years away. BUT if this process is an indication of how these drugs will move forward, then we are in big trouble.   What will happen to us? What does it mean for Alexander?   I shudder to think and do not allow myself to take that thought past tomorrow. Like the rest, I feel defeated and heartbroken, yet I have to keep reminding myself that God has the final say. That No weapon formed against us shall prosper.

Many have asked what they can do. Two things:

We will have our day. For now, I know we must live consciously and presently enjoying each day with our children. No one knows what tomorrow will bring. I know that for sure.